“On The Fence II”, Jaffa

“On the Fence” was initially an art guerrilla event where local artists and residents took over a major street in Jaffa. Before 1948, Jaffa was the cultural centre of Palestine, after which it was annexed to Tel Aviv and suffered years of neglect, disinvestment and house demolition.  The success of “On the Fence” prompted the city to incorporate it into Tel -Aviv’s White Night festival. However, while the event was advertised as part of the municipality celebrations, no money was invested in it and the artists were not even paid for setting it up. Moreover, the White Night festival took place at the same time as the evictions of the street and square occupations by Movement for Social Justice (equivalent to the Occupy movement in Barcelona, London, New York and the Arab Spring).

The Performance Artist Strike, or How Close Are We to Bouazizi?  was a critique of this exploitative situation. Originally the event was suppose to be a screening of a documentary film about the Arab-Jewish Jaffa’s camp for social justice but the lack of funding for Arabic subtitles meant the screening was impossible.

Using the language of high art, Jackson Pollock’s action painting, the expensive paint was replaced by paint stripper, and the strikes left hardly any visible marks – until the paint stripper was set alight on the canvas. The canvas was signed then not with the name of the artist, nor with Jackson Pollock, but with Sam Pollock, a renowned  American labour leader. The work’s subtitle and the use of fire as painting material also memorializes Tarek al-Tayeb Mohamed Bouazizi’s self-immolation which sparked the Tunisian revolution and the “Arab Spring” in late 2010.

At the end of the performance, the canvas, now covered with abstract burning marks, was cut into pieces and put on sale.

p.s. Four months after the installation posed the question, “How close are we to Bouazizi?”, the answer came in a demonstration marking the anniversary of the Protest for Social Justice Movement. On July 14, 2012, Moshe Silman, one of the movement’s activists, burned himself to death, in the centre of Tel-Aviv, in front of press cameras.

A video clip of the intervention can be view here: https://www.youtube.com/watch?v=7vkWLNi2j6c&feature=youtu.be

A short essay about the intervention was published in 2017 in ArtLeaks Gazette: https://art-leaks.org/tag/gil-mualem-doron/ 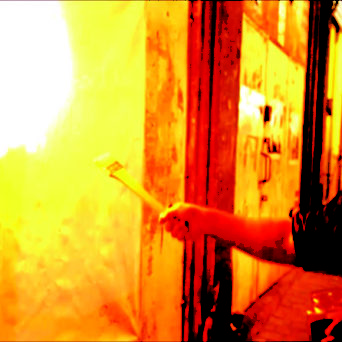 User not logged in. Please call login() and then try again.